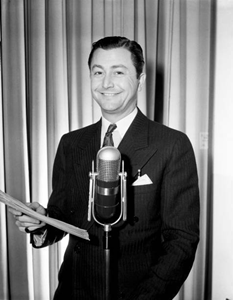 The Film Detective Podcast brings together two of the most engaging media in entertainment history, old-school radio and podcast, delivering a bi-weekly program devoted to revisiting classic radio shows that have dominated the airwaves throughout. the golden age of radio.

Radio shows featured on The Film Detective Podcast will include mystery and detective shows like The New Adventures of Sherlock Holmes, The Adventures of Thin Man, Dragnet, and The Adventures of Sam Spade, Detective; comedies including The Burns & Allen Show, Father Knows Best, and the Jack Benny program; science fiction and suspense including X minus one and Suspense; and westerns like Have Gun Will Travel, Gunsmoke, and The Roy Rogers Show. Many featured radio shows also have TV adaptations available to stream on The Film Detective’s classic movie and TV app.

Reaching over one hundred million listeners each month, podcasting is the latest initiative in The Film Detective’s mission to bring classic entertainment to modern audiences.

“We are thrilled to bring classic radio to a whole new generation of listeners through The Film Detective podcast,” said Phil Hopkins, President of The Film Detective. “Similar to classic radio, podcasts have redefined audio entertainment, providing a unique opportunity to present to today’s audiences the beloved shows that once dominated home entertainment with modern podcast technology.”

The Film Detective podcast will be hosted by Carl Amari, film producer, unionized radio host and a leading authority on the golden age of radio. Through his company, Gulfstream Studios, Amari has spent decades licensing the rights to more than 50,000 hours of original radio programming. Amari has brought his radio expertise as the producer of several award-winning shows, notably as the creator / producer of Twilight Zone radio dramas and producer / host of Hollywood 360.

“These Spirit Theater radio programs have paved the way for today’s podcast revolution and I am delighted to share them with The Film Detective’s global audience,” said Amari.

About The Film Detective:

The Film Detective is a leading distributor of restored classic programming, including feature films, television, foreign imports, and documentaries, and is a division of Cinedigm. Launched in 2014, The Film Detective has distributed its vast library of over 3,000 hours of movies on DVD and Blu-ray and through major broadcast and streaming platforms including TCM, NBC, EPIX, Amazon, MeTV, PBS, etc. The Film Detective has released its classic movie app to the web, Android, iOS, Roku, Amazon Fire TV, and Apple TV and is available live with a 24/7 channel on Sling, STIRR, Plex, Local Now, Rakuten TV and DistroTV. For more information, visit www.thefilmdetective.com.

For more than twenty years, Cinedigm has led the digital transformation of the entertainment industry. Today, Cinedigm entertains hundreds of millions of consumers around the world by providing premium content, streaming channels and technology services to the world’s largest media, technology and retail companies.

This content was posted through the press release distribution service at Newswire.com.